﻿﻿I have discovered that lightning causes interference to AM radio receivers from a great distance. This is due to the way the AM recievers operate, Amplitude Modulation, and the spark of lightning causes a wide band pulse of energy around 500Khz. This means that while I am out chasing storms, I can listen to the AM radio around 530Khz, and determine the relative activity of the storms around me.
﻿
The interesting part of this, I can use the radio to listen to a storm even though it is not producing Cloud-To-Ground (CG) lightning. The radio can also recieve the Cloud-To-Cloud static discharge as well. The only problem is the radio and antenna of the car is Omni-Directional (I receive the signal from all directions), so I cannot use the radio to determine where the stronger storms are around me.
﻿﻿﻿﻿
I started looking online for Lightning Detectors, and what commercial products I found were either expensive, not informative. There are some portable lightning detectors on the market that will estimate the time a storm will arrive, based on the same AM Pulses. Other detectors are dependent on a computer with expensive software, and it uses other similar stations to triangulate the location of a lightning strike.

I started thinking about Doppler Shift Radio Direction Finding, and even asked a local Elmer if I could use the same technology tuned for the 144MHz band on the 500KHz lightning pulses. This was ruled out due to the need to adjust the antenna size and spacing to achieve what I wanted to do, making this a non portable project.

The Elmer did suggest an alternative technique for radio direction finding, and that was to use the signal strength. This is what most people do when they first go Fox Hunting (Radio Direction Finding), they put a handheld radio against their body, and while rotating, they observe the signal strength meter. Using the body as an attenuator, you find the dip in signal, and the signal is coming from directly behind you.

I started building the recievers into a box, and used a 5v regulator for each receiver. I had some issues with two of the receivers, and that required some troubleshooting and replacing a few blown components. I also noticed some interactions between the receivers while testing, so I added a diode to the ground of each reciever and that seemed to isolate the recievers from each other.

I salvaged an IDE connector from an old motherboard and used a computer case wiring harness to enable me to disconnect the front panel lights to work on the unit if necessary. While I was building the units, I added the Red LEDs to each receiver for testing purposes, but I didn't bother to remove them once complete.

Testing each receiver is easy, simply take a multimeter on conductivity test, and when you test between the GND and the antenna lead, the circuit should activate the LED for a moment. The lightning simulator from TechLib is also useful, but a similar can also be done with a BBQ sparker or an Aim-N-Flame. A small spark will cause a similar burst of interference as a bolt of lightning. Because of the small size, the sparker test stops working when more than a foot away from the antenna. 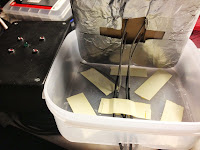 Next, I started building a simple antenna array for the recievers. I used a tupperware container, and wrapped cardboard with aluminum foil.  I double stick taped the foil so it would stay on the cardboard. I created a small channel under the bottom square, so I would not damage the RG-174/U Coax. I placed two hard drive megnets inside the case, under the base square of the antenna, so I could Mag Mount the antenna to the top of my car.

Before securing the base of the antenna to the case, I poked a hole in the center of the case, and ran a ground wire. This would allow the antenna to use part of the car as a ground plane. This might not be the most efficient design, but I am not transmitting with this unit, only recieving.


Next, I started building the ellements. I took the ground from each coax, and soldered them together in the center. I added the cross to isolate each antenna. This design would give me an eight way direction of the storm, in theory. I also added a ground wite to each of the crosses, and soldered it down onto the base. I checked that I had a good ground with a multimeter. Next, I took a few feet of wire for the element and attatched it to the cross with more stick tape. 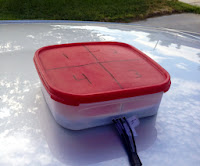 Here is the completed antenna. Now if I can just get people to accept it, instead of yelling at me, while driving 70 MPH, that I "have something on the roof". I think a gray can of spray paint should do the trick.

Now if I can just get a few thunderstorms in the area.


Browse other gifts from Zazzle.